Pilgrimage Tour in the First Christian Country in the World

When you book with an account, you will be able to track your payment status, track the confirmation and you can also rate the tour after you finished the tour.
Sign Up
639

Armenia is the first country in the world to adopt Christianity as a state religion in 301 A.D.

Don’t miss the chance to visit ˝The Cradle of Christianity˝, see the first Christian Church in the World,  one of the holy relics of Christianity – The Holy Spear with Armenia Hospitality.

Arrival
– Transfer to hotel and check in.
– Overnight in Yerevan.

– Breakfast at the hotel.
– City tour: Republic Square, Opera and ballet house, Cascade. Visiting Matenadaran. The Mesrop Mashtots Institute of Ancient Manuscripts is a repository of ancient manuscripts, research institute and museum. It holds one of the world’s richest depositories of medieval manuscripts and books in Armenian and many other languages.
– Drive to Charents Ark. Charents was an Armenian poet, writer and public activist.
– Lunch in habitat house.
– Garni Temple was built in the first century A.D. by the Armenian King Tiridates and is dedicated to a heathen god, probably to Mithra, the god of the sun whose figure stood in the depth of the sanctuary.
– Higher up the gorge of the Azat river, there is a magnificent monument of medieval Armenian architecture Geghard monastery inscribed in the UNESCO World Heritage list. Geghard is an incredible ancient Armenian monastery, partly carved out of a mountain.
– Return to Yerevan.
Mass in the ruins of a church in Garni or in the garden. You have to have table wear, glass, candle, wine, water because it is outdoor (depending the weather).

– Breakfast at the hotel.
– Drive to Genocide Museum. Genoside Museum and Memorial, erected to commemorate the Genocide of 1.500.000 Armenians by Ottomans.
– Zvartnots temple – the pearl of the 7th c. architecture (inscribed in the UNESCO World Heritage list).
– Continue the tour to Etchmiadzin. The Cathedral was built between the years 301 – 303 AD under the Armenian king Tiridates III and the first Armenian Catholicos, St. Gregory the Illuminator.
– Lunch in Echmiadzin.
– Return to Yerevan .
– Visiting famous Ararat Brandy Facory. Ararat Brandy Factory is the leading enterprise of Armenia for the production of alcoholic beverages. Its main brand name is Ararat. Walk around the ageing cellar and see how the brandy spirits are preserved, know who have nominal barrels and enjoy the delicate aroma of the cellar. Fulfill the experience with brandy tasting.
– Parajanov Museum.
– Dinner and overnight in Yerevan.
Meeting with Father Partev Apostolic Priest at the Church of the Holy Mother of God Apostolic Church near Etchmiadzin. Mass in the church.

– Breakfast at the hotel.
– Drive to Amberd. The principal architectural features of medieval fortress-building have found their reflection in this fortress. Built on a naturally well-defended cape, Amberd has for long time served as an important military fort. Next to this secular edifice there is a church built in 1026 by the duke Vahram Pahlavuni.
– Saghmosavank. 5 km far from Hovhanavank monastery on the edge of Kasakh river canyon, in the 13th century Vachutian dukes built Saghmosavank monastery. Saghmosavank underwent the devastating influence of the earthquake in 1988. The reconstruction comleted in 2000 returned the church its beauty and glory. Armenian alphabet monument” is located in the village of Artashavan, at the east side bottom of Mt. Aragats. It was erected in 2005 to the 1600 anniversary of creation of the Armenian alphabet by the design of the famous Armenian architect Jim Torosyan.
– Return to Yerevan.
Mass in the chapel of the Seminary of Mekhitarist priests.
The Mekhitarist: Armenian congregation of Benedictine monks, founded in 1701 by an Armenian Catholic theologian, Mekhitar of Sabaste.

– Breakfast at the hotel.
– Monastery complex of Khor Virap – the pit of imprisonment of St. Gregory the Illuminator, accused by the Armenian King of preaching Christianity. Here is also the closest and most spectacular view of the gorgeous biblical mountain Ararat.
Noravank is a 13th-century Armenian monastery, located 122km from Yerevan in a narrow gorge made by the Amaghu river, near the city of Yeghegnadzor, Armenia. The gorge is known for its tall, sheer, brick-red cliffs, directly across from the monastery.
– Lunch in Noravank.
– Areni village in the Vayots Dzor Province of Armenia is best known for its wine production. Tasting Areni wine.
– Return to Yerevan.
– Dinner in Yerevan.
Meeting with the Sisters of Mother Teresa
Mass following the meeting in the chapel of the Sisters of Mother Teresa.
The sisters of Mother Teresa of Calcutta work in Armenia since 1989.

– Breakfast at the hotel.
– Departure to alpine Lake Sevan. Situated at the altitude of 2000 meters above the sea level, Sevan is the largest alpine high mountain freshwater lake in the Caucasus region and in Armenia. It is impossible to imagine the island of Sevan (currently a peninsula) without the Sevan Monastery 9th c., a perfect example of a man-made testimony of faith complementing the surrounding divine nature.
– Dilijan is a resort town in the Tavush Province of Armenia. Named Armenian Switzerland or Little Switzerland by the locals, it is one of the most important resorts of Armenia, situated in Dilijan National Park. The forested and reclusive city is home to numerous Armenian artists, composers, and filmmakers and features some traditional Armenian architecture.
– Overnight and dinner in Dilijan.
Meeting with the priest of the Armenian Apostolic Church in Sevan and seminarians.
The group meet the seminarians and apostolic Father Sevanavank. The seminary was founded by Catholicos most beloved Armenians Vazgen I, the seminarians are studying there for 4 years.
Sometimes at the end of meeting, the choir of seminarians sing for the group (It depends on the time available and the availability of seminarians).

– Breakfast at the hotel.
– Haghartsin is a 13th-century monastery located near the town of Dilijan in the Tavush Province of Armenia. It was built between the 10th and 14th centuries. The monastery of Sanahin is on the right bank of Debed River. This architectural complex consists of several churches, seminary, book depository. The building of the seminary, which connects St. Astvatsastin (Holy Mother of God) and Allsaviour churches was from the outset built to make the edifices more earthquake resistant. Haghpat. Situated not far from Sanahin, Haghpat monastery has its significant place in the historical and cultural life of Armenia. It was built during the reign of king Ashot Bagratuni. Numerous valuable manuscripts and miniature paintings have been produced in the scriptorium of Haghpat for many centuries. In the 18th century the famous Armenian bard Sayat-Nova used to live and create in this monastery. The belfry with its unique architectural composition is of stunning interest.
– Return to Yerevan.
Mass in the courtyard or in the Jamatoun Hamazasp in Haghpat.

– Check out.
– Transfer to the airport. 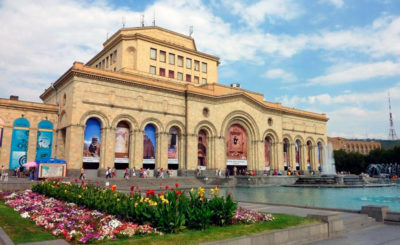 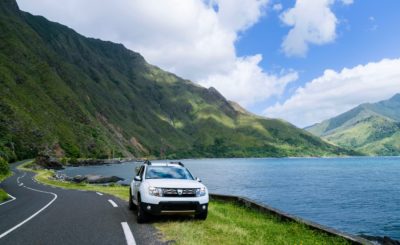