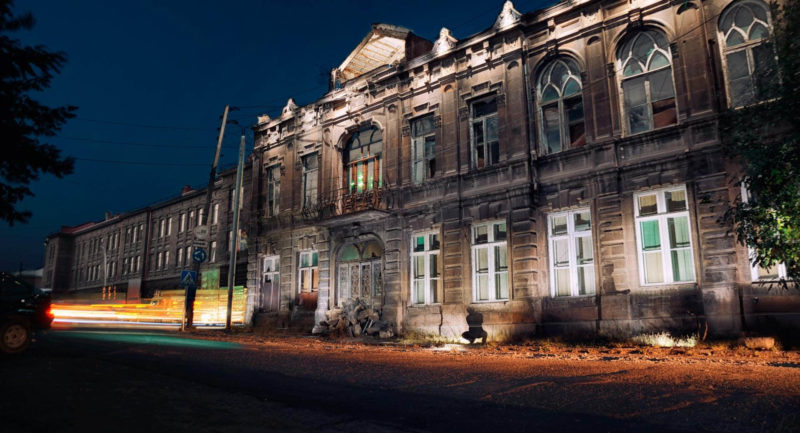 Gyumri is Armenia’s second largest city. It is the Shirak region’s center. The city’s territory has been inhabited since antiquity. Dwellings found today date back at least to the start of the third millennium B.C.E. The first reference to a state in the Gyumri area was in an Urartian inscription in the 8th century. The territory was not too far from the present village of Marmashen and was given the name “Kumayri.” Over the millennia, the name “Kumayri” evolved into Kumri, then Gumri, and finally Gyumri.

It used to be renowned as Armenia’s most wonderful city. Afterward, in 1988, the destructive Spitak Earthquake nearly wiped Gyumri off the map, killing an estimated 25,000–50,000 people and erasing most of Gyumri’s architectural heritage. These days, most tend to associate Shirak Region’s center with the enormously tragic event and its aftereffects. Gyumri is still trying to rebuild and it’s full of hope.

A fresh crop of social entrepreneurs, creative endeavors, and stylish coffeehouses has breathed new life into the city center, while the reconstruction of Gyumri’s Art Nouveau houses and marvelous Armenian Apostolic churches are preserved in the surrounding streets.

Gyumri is now a warm and inviting city with clean mountain air and refreshing cold water. Despite its small size, we recommend staying for at least a couple of days to allow for leisurely walks and time to explore the city as a whole, as Gyumri is a city with a wide range of eye-catching architectural styles.

Let’s take a closer look at some of Gyumri’s most notable cultural sights and tourist attractions, places to visit!

As noted above, the first thing that strikes you about Gyumri is its stunning architecture. The coal colour is the organic tone of volcanic tuff, a stone excavated outside Gyumri and used to build the majority of the older structures. Tuff stone in orange-gold is frequently used to detail windows, doors, and arches. It’s a colour scheme you’ve never seen before.

Gyumri’s focal point is Vartanants’ Square (Freedom Square). Many of the city’s most significant and remarkable structures, including City Hall and multiple of Gyumri’s most prominent churches, confront public space.

The square was first opened in Gyumri in the 1930s and was known as Victory Square. The square’s construction was timed to coincide with the 1920 uprising of pro-communist forces in Armenia. The project was brought to life by the well-known architect, Alexander Tamanyan. Nowadays, several fountains, recreation areas, and a monument to the victims of the 1988 earthquake can be found here.

The visit of Pope Francis in 2016, who held a Catholic liturgy in Vartanants Square, was a significant event and an important milestone in the city’s life. Garegin II, the Catholicos of All Armenians, also attended the ceremony.

Vartanants Square also has a number of magnificent churches. Yot Verk (Seven Wounds) is one of them. It is made of coal tufts and serves as the seat of the Diocese of Shirak, The Armenian Apostolic Church’s local wing.

The Yot Verk was severely damaged in the 1988 quake, but it was rebuilt from scratch and is now a completely functional church. Two big, lumbering stone structures that once topped the steeples of the church but tumbled during the quake now stand in the front yard. It is believed that keeping these is a magnificent and deeply moving tribute to the city’s strength.

The Museum of National Architecture and Urban Life is among Gyumri’s most appealing and must-see places. The museum is housed in an old mansion and contains collections relating to Gyumri’s historical and cultural heritage and society, as well as the city’s architectural features.

Petros Dzitoghtsyan, a first-class and wealthy merchant, founded the renowned house in 1872. It is constructed of Shirak’s prominent indigenous red tuff stone. The architect of the building devised an ingenious solution to build the structure on a splay. The eastern section contains a single floor, whereas the western section has two. Luckily, neither the 1926 nor the 1988 earthquakes caused even minor damage to the structure.

With a height of 36 metres, Holy Savior’s Church, also known as St. Amenaprkich, is Armenia’s tallest church. It was built in 1858-1872. The church’s design was inspired by the architecture of Ani Cathedral. The Holy Saviors’ Church, by contrast, is much higher than Ani’s Cathedral. The architect was Tadeos Andikyan, a well-known and renowned master.

The Soviet government confiscated it at the beginning of the 1930s, and the bell tower was destroyed in 1932. The Church of the Holy Saviors was significantly damaged during the 1988 massive earthquake and has been undergoing extensive renovations since 2002. The renovation is currently in its final stages, yet it is accessible to the general public.

It’s worth walking around the facade, which has been rebuilt wall by wall. The church is surrounded by artful khachkar cross stones. A Soviet-style memorial to the victims of the 1988 earthquake can be found in the back.

Sev Berd is one of the most fascinating military structures you’ll ever see. The fortress is a flawlessly shaped circle, built with black and apricot tuff with small portable openings and one access point through a drawbridge.

It was constructed by the Russian Imperial powers who reigned in Gyumri (thereupon known as Alexandropol) following the Russo-Turkish War of the 1820s. Its hill-overlooking location, just 8 kilometres from the Turkish border, was strategically crucial. Following a period of dormancy, the property owners officially reopened it as an entertainment complex and hotel. Yes, it has a stage and even a sound system!

A ramp beneath the main stage leads to a vast underground museum with images of old Alexandrapol and its members, the Russian royals. You can also observe the original well from which troops drew groundwater.

Gyumri’s Victory Park, with its epic Mother Armenia monument, is directly adjacent to Sev Berd. These statues can be found across the former Soviet republics, including Yerevan and Tbilisi.

Gyumri’s matron was cast in bronze in 1975 to commemorate the Soviet big win in WWII. Mother Armenia confidently raises one arm into the air, carrying an ear of wheat in her arm. At Mother Armenia’s feet, a massive staircase and fountain complex resembling Yerevan’s Cascade unfolds like a carpet. At the bottom of the stairs, the memorial continues with greenery and rock slab inscriptions with the names of all former Soviet capitals in Russian script.

Education and entertainment, or so-called “educational” places of interest, are becoming increasingly favored all over the globe. The Museum of Illusions, which combines scientific knowledge and amusement, is a perfect representation of this. This fantastic world of illusions will try to fool your senses, surprise, and confuse you while also educating you.

At first glance, approximately 50 displays involving physics, mathematics, and psychology appear ordinary, but they are “magic” rooms where you will be amazed and thrilled while upgrading, boosting, and gaining new knowledge from various disciplines.

Nothing here is as it appears. Are you up for bigger, better, and more exciting adventures? Then this museum is definitely for you!

Gyumri is the only city in the world where a monument to the great chansonnier Charles Aznavour can be found. Samvel Petrosyan’s sculpture was installed here in 2001, and he himself was present at the opening ceremony.

Making a monument during the life of his hero, according to the author of the sculpture, is a great joy and an once-in-a-lifetime experience, especially when it comes to someone like Aznavour. The singer chose the sketch in which he is shown walking proudly across his native land from among those presented.

The sculpture stands nearly 7 meters tall and is made of bronze and granite. An arch surrounds the sculpture and is part of the overall composition.

This street is part of the historical neighbourhood “Kumairi,” which is a good embodiment of the old city at its best. The buildings on Abovyan Street are made of black tuff. This street has quite a distinct charm due to its distinctive architecture. Window frames, facades, and main entryways are adorned with intricate and competent stone carvings that transform each house into a unique work of art.

The area contains approximately 1,500 buildings, some of which date back to the late 18th century. Houses adhere to the “Armenian Belle Epoque,” an elegant architectural style favoured by their skilled artisans and merchandisers.

The Cobweb Art Gallery is Gyumri’s most unusual museum. Many years ago, after entering an abandoned room, the museum’s creator had the perplexing idea of drawing a picture from the cowbeb. Technology was developed and improved gradually.

Andranik Avetisyan is currently displaying an entire museum of cobweb paintings. If you come on a tour, the artist will open the doors to the same once-abandoned room where he began to breed material for his one-of-a-kind paintings.

Attraction 10. The statue of Mushurba

During your stay in Gyumri, you’re bound to hear about “mushurba,” the city’s distinctive symbol. A Mushurba is a peculiarly shaped goblet with its own distinct sound. When filled with water, the goblet begins to make a unique sound. Due to the shape of the goblet, the sound is audible. The lower section is larger and more spacious than the upper section. It is known as “klklan” because of its semi-round shape (guggling).

When water enters that section, it begins to form air bubbles, and when the bubbles burst, they produce that distinctive sound. A mushurba’s design aids in maintaining the temperature of the liquid inside.

The secret of mushurba is only known to craftsman Eduard Zhamkochyan, the planet’s only maker of Mushurba cups. Eduard claims that his forefathers were coppersmiths who migrated from the Western Armenian city of Erzrum in 1895-1896. They managed to bring the secret of creating mushurba to Alexandrapol with them. The master claims that his grandfather’s msushurba did not make the sound. Suren, his father, owns the rights to “gurgling” mushurba.